Hi again friends!
It's i-crafter's Release Day and I am so excited to share the new Dashed Circles dies. This set is super versatile and allows you to use your other i-crafter products (and every other company's products) in even more fun ways! The dies cut dashes on two sides of the cut circle creating a positive and negative space that can be used on your projects. I have 3 cards to show you today with fun ways to create using this great new set.
My first two projects use paper from Echo Park's Perfect Princess paper pad. I have two adorable little girls that are getting a package from me soon and I wanted to include some cards for them.
The first card, I folded my card base out of a dark gray, and took the die to the very edge of the fold. By placing the cutting circle just over the fold, I was able to cut *almost* a full circle card base. My cutting machine didn't fully cut the bottom circle's dashes, I could have recut or used a shim to help it, but decided that I liked the look and kept it as is. 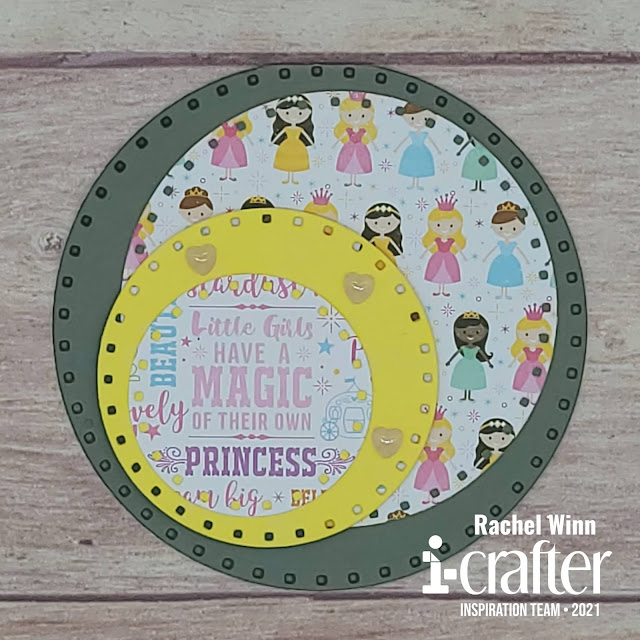 Next, I picked my patterned papers from the Perfect Princess pad, and die cut two Dashed Circles from it, the larger of the two circles is the princesses, the smaller is a sentiment that says "little girls have a magic of their own, princess."
I added a medium sized Dashed Circle in a bright yellow to contrast with the gray and create space between the two patterned papers. This was popped-up on a thin foam tape, then the smallest Dashed Circle was added to it. I finished the card with 3 light purple heart embellishments from HAI Supply
The second card, I used the same paper pad, but wanted to show off a few more tricks the Dashed Circles die set can do! I started with a blue-green card base then cut down another piece of the yellow to add on top of that. I cut out various pieces of the patterned paper that I wanted to include. Next, I took a medium sized Dashed Circle die, and added the die one size smaller in the center of it. I cut both of these at the same time, creating a frame for my unicorns (I lined up the outer circle dashes on both the unicorns and the frame) and a back layer for my crowns. 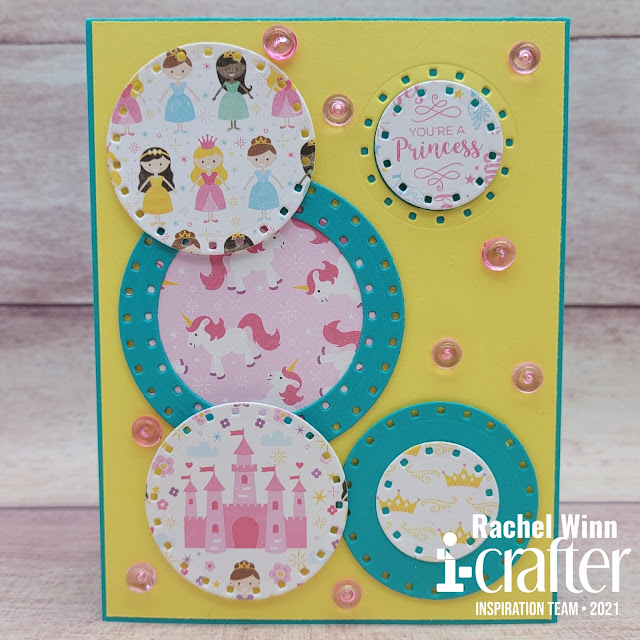 After playing with the layout of the 4 patterns, I turned my attention to the sentiment circle "You're a princess". In order to highlight this circle, I positioned the smallest Dashed Circle die in the top left of the yellow layer, creating a negative space that opened up to the blue-green base. I added foam tap to the back of the sentiment to give it more depth. I finished this card off with some Raspberry DoubleClick Skittles.
My last card is super shiny! I stared with a black card base to make the Holographic Cardstock pop more, in the center of this shiny layer, I used second from the smallest Dashed Circle die and cut a negative space. I used this to line up the location for my Halo Lights. I added the center cut piece of the Holographic Cardstock to help the light reflect upwards more (black tends to absorb light so this helped more go upward.) I also used a metallic blue marker to fill in the rest of the black, thinking I would be using vellum to fill the negative space, which I later decided against. 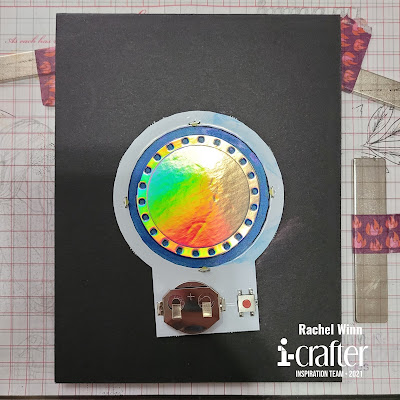 Next, I cut out 2 partial Dashed Circles from a striped pink cardstock scrap. I grabbed the scraps of my yellow cardstock from earlier and cut out "Shine on" for the top circle, and "like a" for the bottom circle with i-crafter's Carly alphabet dies. For "diamond" and to fill the negative space in the center, I used Light Blue Metallic Paper. 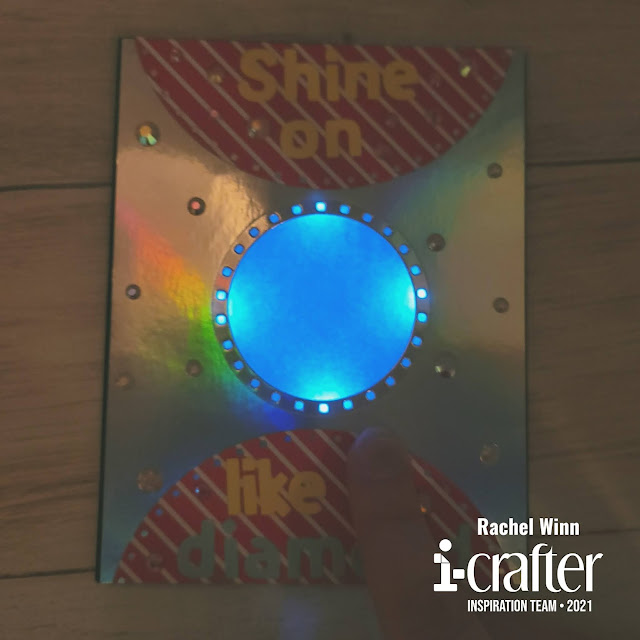 I finished the card off with Diamond Clear Jewels from HAI and by writing in "Push" since I failed to stamp it before I glued everything together! Here is a short video show off card all lit up!
Head over to i-crafter to get the new Dashed Circles die set, and check out the other wonderful new release items too! Be sure to join the i-crafter Facebook Fan Club, then follow us on Instagram, and Pinterest too! We love seeing all of your creations using the i-crafter products.
Until next time,
R. Winn
at May 01, 2021 No comments:

It's Rachel, back to show off a fun little take on the new Slimline Knit, Knots, and Stitches die set. I focused on the Knots die, which to me, could be used in a variety of ways... but mostly reminds me of donuts. I couldn't think up a way to showcase it AS donuts though, so I went with a party banner or streamer instead.

I started by cutting out a mini slimline card base (3.25"x6.25") in a bright, fun green. Then, I cut down a 6"x6" sheet to add start my background. The Slimline Knots die came next, I cut this out twice using a playful, deep pink. I wound this back and forth on my card, the pattern wound up go back and forth three times.

Our Purrfect Birthday stamp set seemed like a fun item to pair with the background that I had created. I stamped out the cat and the mouse onto XPress It Copic friendly cardstock, then colored them up! The sentiment was also from the Purrfect Birthday stamp set, I stamped onto the same green that I had used for the card base, this I cut using the small banner die from the Rosette Ribbon die set. This I mounted in the center of the larger banner from the Rosette Ribbon die set, which I cut out of a balloon patterned paper.

I finished the card off with some cute little enamel hearts as an embellishment. 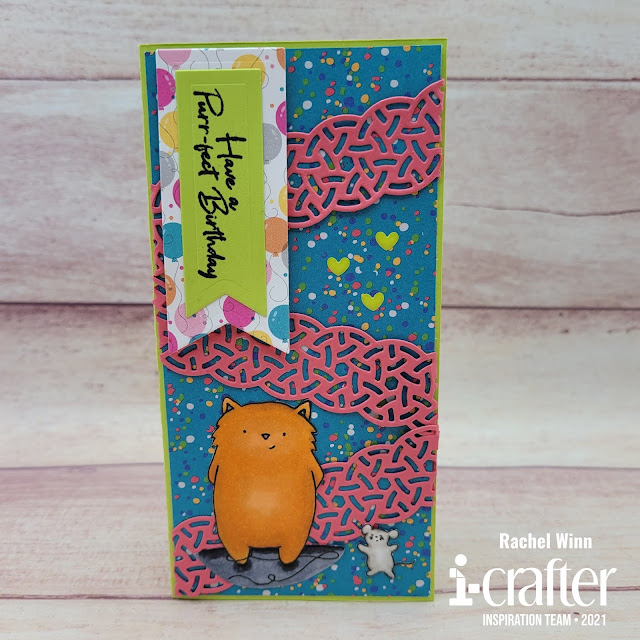 Head over to i-crafter to get the new Slimline Knit, Knots, and Stitches die set, and check out the other wonderful new release items too! Be sure to join the i-crafter Facebook Fan Club, then follow us on Instagram, and Pinterest too! We love seeing all of your creations using the i-crafter products.
Until next time,
R. Winn
at April 22, 2021 No comments:

You are Positive, Mental Health Awareness

I am excited to share my projects using the new Box Pops, You are Positive die set. As soon as I saw this set, I knew I wanted to use it for a Mental Health Awareness project or two, so that's exactly what I did!

May is Mental Health Awareness Month, this is a subject that is extremely important to me. I struggle with severe anxiety, depression, and panic attacks. Life unfortunately gets the best of me, and without my support system, that consists of friends, family, my i-crafter family, and medical professionals, I would stumble into a dark place. We often feel that we are alone in the midst of a mental crisis, and the National Alliance on Mental Illness's message for May is "You are not alone." Mental Health is health. To help improve awareness, we need to talk about what we are dealing with, taking mental health sick days, and supporting our friends and family when they are struggling with their own mental health issues. 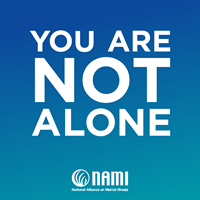 Now on to my projects! I made two, first, I used the "You are" base and added two of the word inserts "strong" and "enough" to it. I used a yellow cardstock for the exterior of the words. I added a dark teal to fill the words "you are" and "enough" words. This is a smaller card, so the words took up most of the card. I kept it simple and just mounted it on a kraft base that has white polka dots. This card is perfect for someone who feels alone and needs to be reminded that there are people who care, that someone is thinking of them. 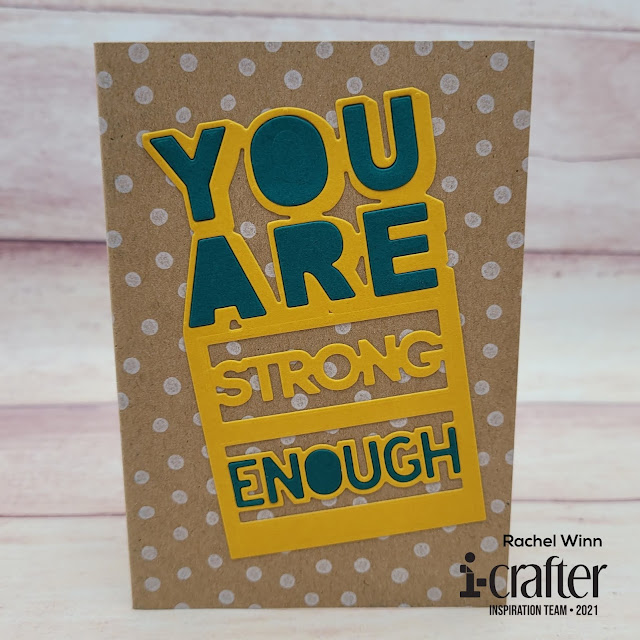 My next project, I wanted to create a bookmark for a gratitude journal that I found at my local secondhand craft store, Lost & Found Crafts. Gratitude journals are a fantastic way to help combat anxiety and depression. They help our brains focus on positives in our lives and see the good we have. I used the colors from the journal to inspire my bookmark. 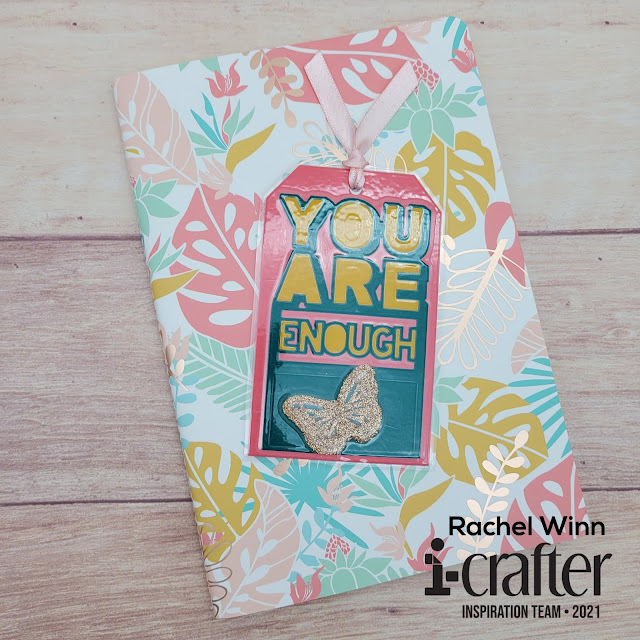 I started with the base of the Zip Gift Tag die set in a bright pink cardstock. Next, I used the teal cardstock with the Box Pops, You are Positive die set, I did "You are enough" this time. I added the yellow centers to the letters from the last project. 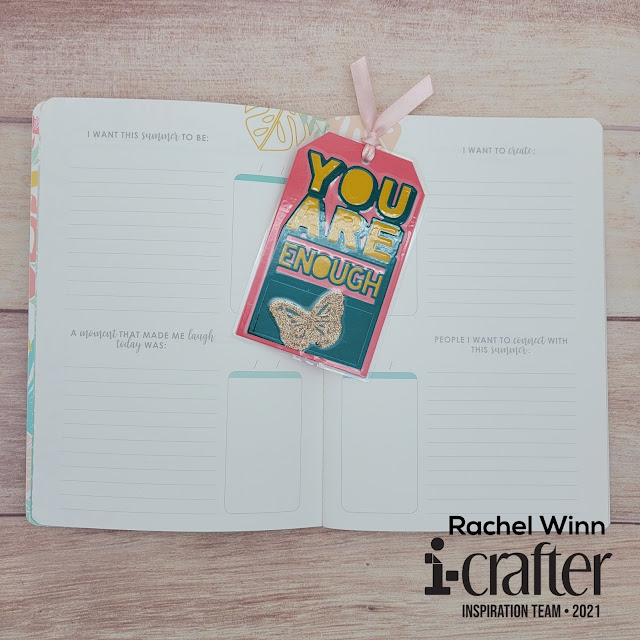 There was a blank space at the bottom, so I die cut one of the butterflies from the Butterfly Burst dies. I covered this in Nuvo's Rose Gold Glitter, it was a bit messy, I don't typically play with lose glitter. To finish it off, I laminated the entire thing, used a hole punch, and added a light pink ribbon to the top. 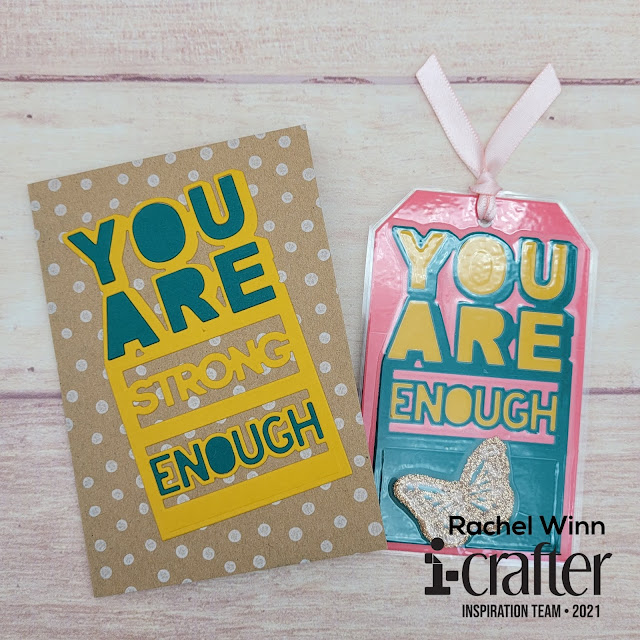 I hope my projects, and message have inspired you. I hope that we can all take a little time to let someone in our lives know that they are not alone, and I hope that you know that you are not alone.
Be sure to join the i-crafter Facebook Fan Club, then follow us on Instagram, and Pinterest too! Don’t forget to include this month’s Anything Goes Challenge hashtag #ICrafterApril21 to enter our giveaways. We love seeing all of your creations using the i-crafter products!
Until next time,
R. Winn
at April 08, 2021 2 comments: 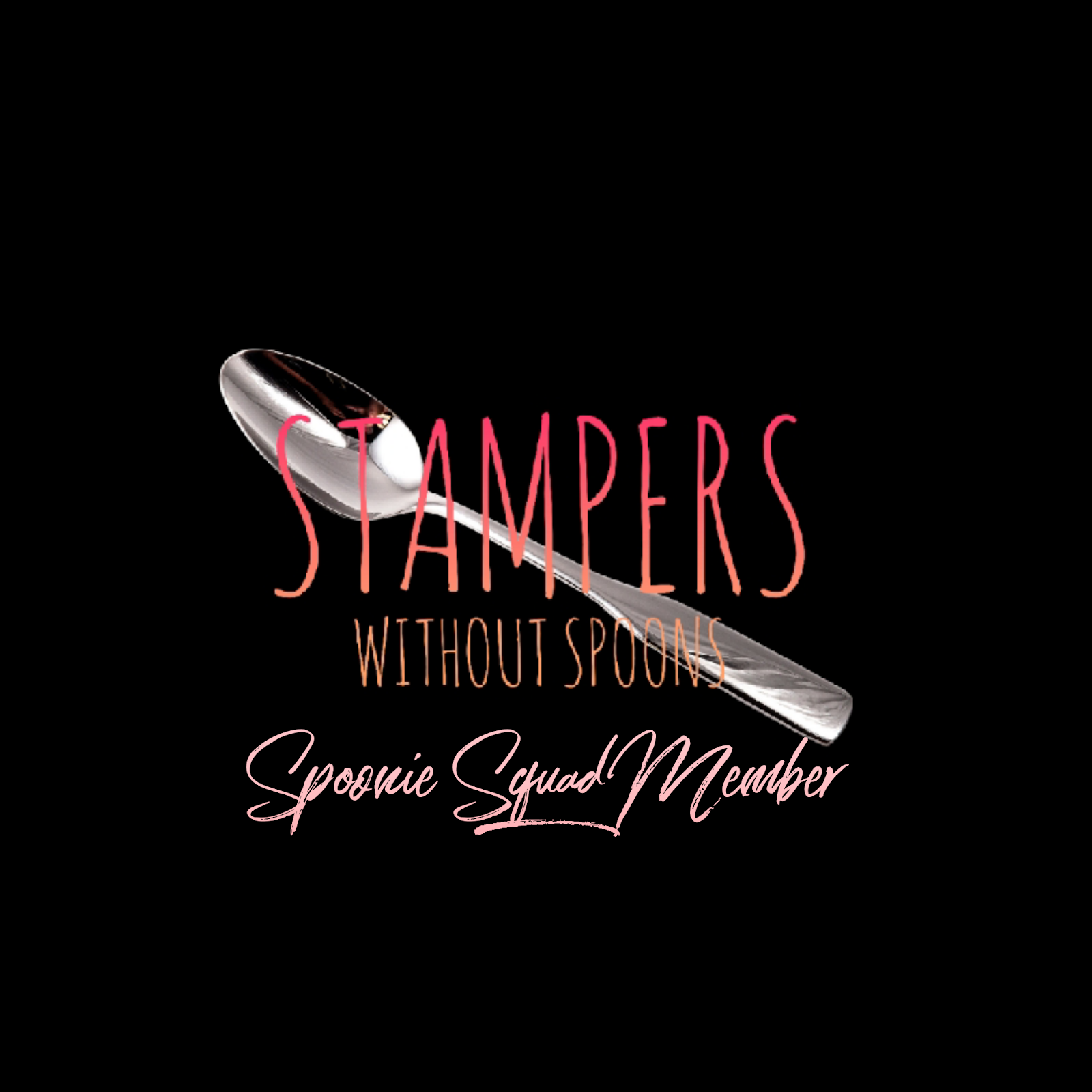 Admin - Group Dedicated to Stampers with Chronic Illnesses or Conditions

This blog may contain affiliate links.

These links will possibly provide you a discount, and I will receive a small compensation in return. Please let me know if you have any questions! 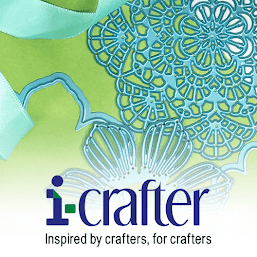 I will receive a small portion of any purchases you make at no additional cost to you! 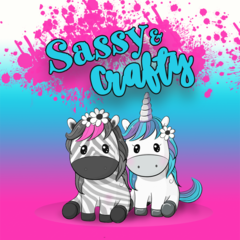 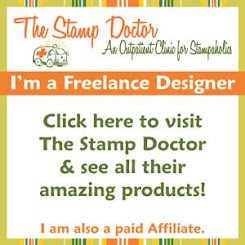